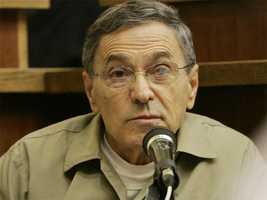 The United States Government presented as a witness in the trial of a retired FBI agent John Connolly for corruption one Francis X. Salemme, also known as Frank Salemme. The federal prosecutors used him as a witness against the Agent Connolly even though they knew he had been arrested by the agent in New York City and held several grudges against him.

They used him, a man skilled in murder and other crimes, knowing he had been the head of the New England Crime family, the Boston/Rhode Island area branch of the Mafia. They defended his testimony even though during the trial he perjured himself about his participation in a murder which they had reason to believe he was involved in. His testimony was crucial to the conviction of Agent Connolly on important counts.

When the agent appealed his conviction because of that perjury, and that Frankie bragged that he lied at Connolly’s trial and made up things the prosecutors hoped he would say, the Federal appeals court in Boston passed it off as inconsequential and upheld the refusal to give Connolly a new trial.

Frankie, like most gangsters, had a nickname. His was “Cadillac.” He was “Cadillac Frank.” He was half Italian and half Irish. That was the reason he was not a member of the Mafia earlier in his career back in the 1960s. The Italian half of him didn’t trust the Irish half nor did the Italians trust anyone with a drop of Irish blood.

The 1960s was that time in the Mafia he was ruefully talking about when he said: “Dem were Da Days.” For him, that’s when the Mafia was strong. No one dared cross it. “Dem days men were men.” Those where the days when he though America was great. He yearned for those days during his testimony.

Frankie liked to hang with the wise guys in Boston’s South End and Roxbury. Because being half Italian he could also pal around with Mafia guys like Larry Bione who was the right hand man of the Boston under boss Gerry Angiulo. He pulled off a couple of killings that made the king, Raymond L.S. Patriarca, take a liking to him. LS, as Frankie called him, operated out of Federal Hill in Providence, Rhode Island. Sometimes Frankie would visit him, or at least that is what he said.

LS didn’t like a Boston lawyer who represented Joe “the Animal.” LS thought the lawyer knew too much. Frankie and others, one being Stephen Flemmi, set a bomb in the lawyer’s car that seriously maimed him when it exploded. A case was built against them so Frankie and Stephen fled the Boston area. Both ended up in New York City. At some point out of the blue Stephen told Frank he wanted to go to Montreal. Shortly after he left Frankie was arrested by the FBI Agent Connolly.

While Frankie rotted in prison, Stephen because of his good deed in turning in Frankie was running around killing people unmolested. While Frankie served time, Stephen got rich, LS died and his son Junior took over. When Frankie got out Junior made him his “king’s man” and inducted him into the Mafia. Frankie was quite proud of this. Frankie began hanging around with Stephen again.

Frankie then got shot outside a pancake place when a war broke out between two Mafia groups. Frankie learned the FBI knew he was going to get gunned down. He thought its agents should have protected him. He again had further reasons to hate Agent Connolly. He never thought Stephen had anything to do with it.

Junior turned out to be a lousy leader. He held a Mafia induction ceremony which was recorded by the FBI thanks to Agent Connolly. Junior and others at the seance got convicted and imprisoned. Frankie should have figured out that the FBI knew about the ceremony because he told Stephen about it.

Frankie skipped the meeting. He said it was because he was shot. Some thought Frankie tipped off the FBI. When the smoke cleared Frankie was named head of the mob by the NY Commission in the absence of having many others to choose from.

Shortly after that Frankie, Stephen and others were indicted. They were all together in the Plymouth jail. While there Stephen told Frankie he was a long time FBI informant. Frankie still didn’t figure out that was why he was grabbed in NY City.

Frankie made a deal with the prosecutors who are now prosecuting him to testify against Connolly. He did this to get a sentence he was serving reduced. Stephen also made a deal to tell about his life of crime and again to squeal on Frankie.

Frankie’s deal allowed him to go into the Witness Protection Program which is now called something else. While there on the people’s dime and being protected by law enforcement, Stephen implicated him again. Frankie, now 84, was back in the slammer.

Frankie’s trial will start this month. Much ado will be made about two murderers in their mid-eighties facing each other in court. It’s all a waste of time. Both men should have been put away years ago and forgotten about.

Come to think of it, Stephen was put away in 2003 but for some reason no one knows whether he is living in the prosecutor’s house, living large on a dude ranch in Colorado, or sunning himself on Marco Island. Although sentenced to life in prison, he has not yet put a foot in the federal prison system. Not a bad deal after murdering his girl friend, daughter, and many others.

PS: My book, Don’t Embarrass the Family,  got its title from something Frankie said during his testimony. If you seek to understand the background of all this you could not do better than to read about the Connolly trial which the book is about.