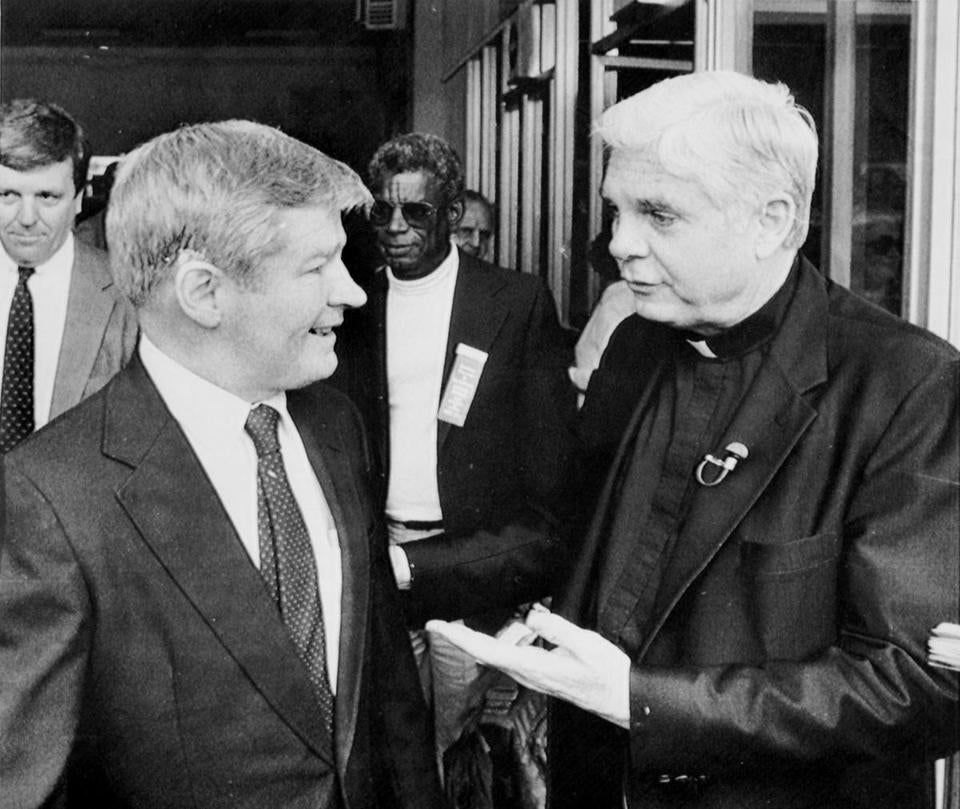 Is Bernard Cardinal Law who just shed his earthly bonds in Heaven? I’m not sure you recall that when Cardinal Law arrived in Boston in March 1984 he was 53 years old. After arriving he : “After Boston there is only Heaven.”

Cardinal Law would be chased out of Boston after 18 years. He fled because of a steady stream of vitriol from the media and the prospect of facing endless days tied up in court or in depositions which have destroyed his ability to act in his  role as Archbishop of Boston. He ended up in Rome where he stayed until his death.

If you listen to Howie Carr and Alan Dershowitz you’d believe he had no chance of Heaven. The latter wrote on the flap of Carr’s book:  “Carr brilliantly shows how the real villains in this tale of mass murder and massive corruption are the “good” people who knowingly facilitated the bad brothers – the . . . Cardinal Laws, …”  Both men are noted character assassins and good buddies of the president working diligently to support him.

Carr also wrote about Cardinal Law,“The church knows plenty about walls – they built an impregnable one around Bernard Cardinal Law when he fled Boston one step ahead of a posse in the wake of the Archidiocesan rape epidemic.”

When Cardinal Law left he acknowledged that many called for his resignation. He said this is “a clear signal that many feel my leadership efforts in this area [of handling priests accused of sexual abuse of minors] have been inadequate.” One Boston columnist just wrote: “Not merely inadequate, but illegal.”

This is typical of the Boston media. It has always overstated Cardinal Laws’ actions. There was nothing criminal or illegal in what he did. His fault was as an administrator and not as an actor.

When I think of what he did I can only think of the FBI and Mafia. Yes, the FBI. Understand that the Catholic Church was very much like the FBI under J. Edgar Hoover and also the Mafia. It was a male run organization. One man had supreme power over the others. Those under the boss who had command over others had one primary duty. It was, as the title of my book noted, “Don’t Embarrass the Family.”

Cardinal Law knew foremost among his duties was to save his family (the Catholic Church) from being embarrassed. Like Hoover, he handled scandalous things in-house. Like what we see today in the #metoo scandals of abuse of women as in the case of Bill O’Reilly and others the victims were secretly paid off. Part of the payment (settlement) required the victims to keep their mouths shut. “If you want the money you can never tell anyone about the abuse.”

In retrospect it is difficult to blame Cardinal Law  The damage from the scandal that priests were involved in abusing children and otherwise involved in sexual behavior would not be hard to imagine. Tradition was that it be covered-up. Cardinal Medeiros swore one victim to secrecy invoking the sanctity of the confessional. Cardinal Law just followed precedent. It was if he knew what would happened when the sluice gates opened. Look at Ireland how the Church lost most of its followers and its power. Look locally how there was a gleeful media gang up on the Church as if it somehow had a monopoly on pedophiles.

The most gleeful of all is the Boston Globe that takes credit for exposing the bad priests yet hides the identity of its own employees engaged in egregious sexual behavior. One of its columnist called Cardinal Law “one of the greatest enablers of sexual abuse in the history of the world.”  I’d suggest Law’s enablement of sexual abuse in the Boston pales in comparison to lawyer Dershowitz’s representation of Jeffrey Epstein who was convicted of sexual abuse but probably abused more young girls himself than all the priests ever did. Derahowitz allegedly sicced investigators on young girls scaring them away from testifying.

Law never committed sexual abuse. How much abuse he tolerated by inaction will never be known. Clearly the great majority of those who were abused suffered the abuse prior to Law becoming aware of the violation or violator. He relied on professionals to treat the offending priests. If anything he was betrayed by his priests and as much a victim as anyone else attempting to protect the Church from embarrassment. As noted, Law did not commit any crime. He clearly hid the abuse but it is hard to believe he knowingly allowed it to continue but in his naiveté believed what people told him that pedophiles could be cured and what his priests told him that they were repentant and would sin no more. It should also be noted that the abuse by priests was no greater than that of any other male group.

Many seem upset that Cardinal Law went off to Rome and was treated well by the Church. They wanted him to walk the streets of some third world country flagellating himself. Even had he done it they would have wanted more in their lust for revenge.

As for me, I always liked Cardinal Law and respected him. He was a good man who did many good deeds, charitable works, and preached tolerance, respect and understanding of others outside the Catholic Church and those within it from foreign lands. I’d guess he was the anti-Trump. And in my book, anyone like that is clearly going to go straight to Heaven.  May he rest in peace.

27 thoughts on “Will Bernard Cardinal Law Go to Heaven?”